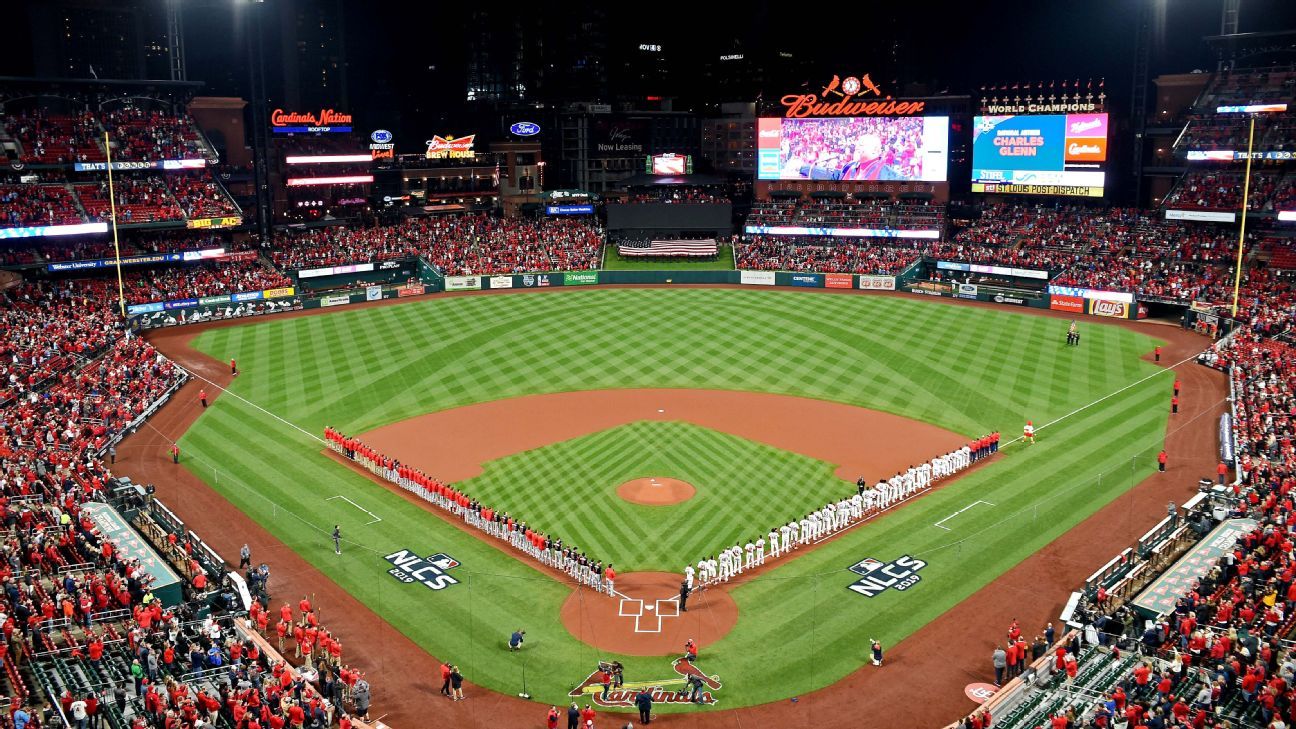 ST. LOUIS — Are the baseballs traveling less distance in the postseason? Cardinals manager Mike Shildt says they are, at least according to data from the team’s analytics department.

Before Saturday’s Game 2 of the NLCS, Shildt said the front office reported that balls are traveling 4.5 fewer feet on average than during the regular season, when there were a record number of home runs hit.

“Our front office analytical group is saying the ball’s not traveling at about a four-and-a-half foot difference,” he said. “I don’t know how that impacts what you do as far as your matchups or more inclined to throw a fly ball guy, I mean four-and-a-half feet is not overly significant, maybe gives us an opportunity to rob someone of a homer a little bit more. But I don’t think it really impacts how you make decisions.”

A study published on Thursday by Rob Arthur of Baseball Prospectus argued that there has been more air resistance on the ball, thus limiting the distance it will travel.

“The probability that a random selection of games from the rest of the regular season would feature as much air resistance as we’ve seen so far in the postseason is about one in one thousand,” Arthur wrote. His model estimated an additional 24 home runs should have been hit in the playoffs at the time beyond the 43 that had been hit.

In response to the talk that the postseason ball may be different, Major League Baseball issued the following statement: “The baseballs used in Major League Baseball are manufactured in batches. Balls that are used in the Postseason are pulled from the same batches as balls used in the regular season. The only difference is the Postseason stamp that is placed on the ball. As has been previously acknowledged, however, the drag of the baseball can vary over different time period.”

Of course, aces like Gerrit Cole and Max Scherzer may have something to do with the decline. Weather is another factor, although Arthur largely debunked that notion in his article. It was 45 degrees in St. Louis at game time on Friday night, by far the coldest game of the postseason so far. (In the Cardinals’ division series against the Atlanta Braves, the temperatures were 94, 95, 63, 72 and 73.)

“I would say [Friday] it was just a matter of it being a little bit colder out and to have a day where it doesn’t travel as much, maybe just the weather changing,” Cardinals outfielder Tommy Edman said.

In the Cardinals’ 2-0 loss to the Nationals in Game 1, Marcell Ozuna blasted a second-inning pitch from Anibal Sanchez at 105.8 mph with a 36-degree launch angle. According to Arthur on Twitter, a ball hit with that exit velocity and launch angle should have a 70 percent probability of being a home run. Granted, Ozuna hit to center field, the deepest part of the ballpark, but the ball died short of the warning track, 382 feet from home plate. Statcast, MLB’s statistical service, gave the ball an expected batting average of .690. Instead, it fell harmlessly into the glove of Michael Taylor.

Edman and Cardinals teammate Jose Martinez said there hasn’t been much talk among the players about the ball.

“I haven’t noticed anything different in the ball,” Edman said, asking Martinez if he had.

In the regular season, teams averaged a home run every 24.59 at-bats. Heading into Saturday’s games, they’ve averaged one every 26.87 at-bats. After averaging 4.83 runs per game in the regular season, scoring is down to 4.0 runs per game so far in the playoffs. Of course, we’re seeing better pitching and some teams haven’t had to dig down to their No. 4 starters yet, plus run scoring usually goes down in the postseason — but not to this extent:

“Yeah, it’s interesting, there are a couple balls that I felt that — I don’t know the weather patterns of D.C., but that maybe you see the trajectory and the sound and it doesn’t seem like it’s traveling — even the Cody (Bellinger) ball that it seems like that ball, other times during the year, might have went out or went a little bit deeper in the ballpark. So I’m sure there’s going to be some digging on that, but yeah, it seems a little different.”