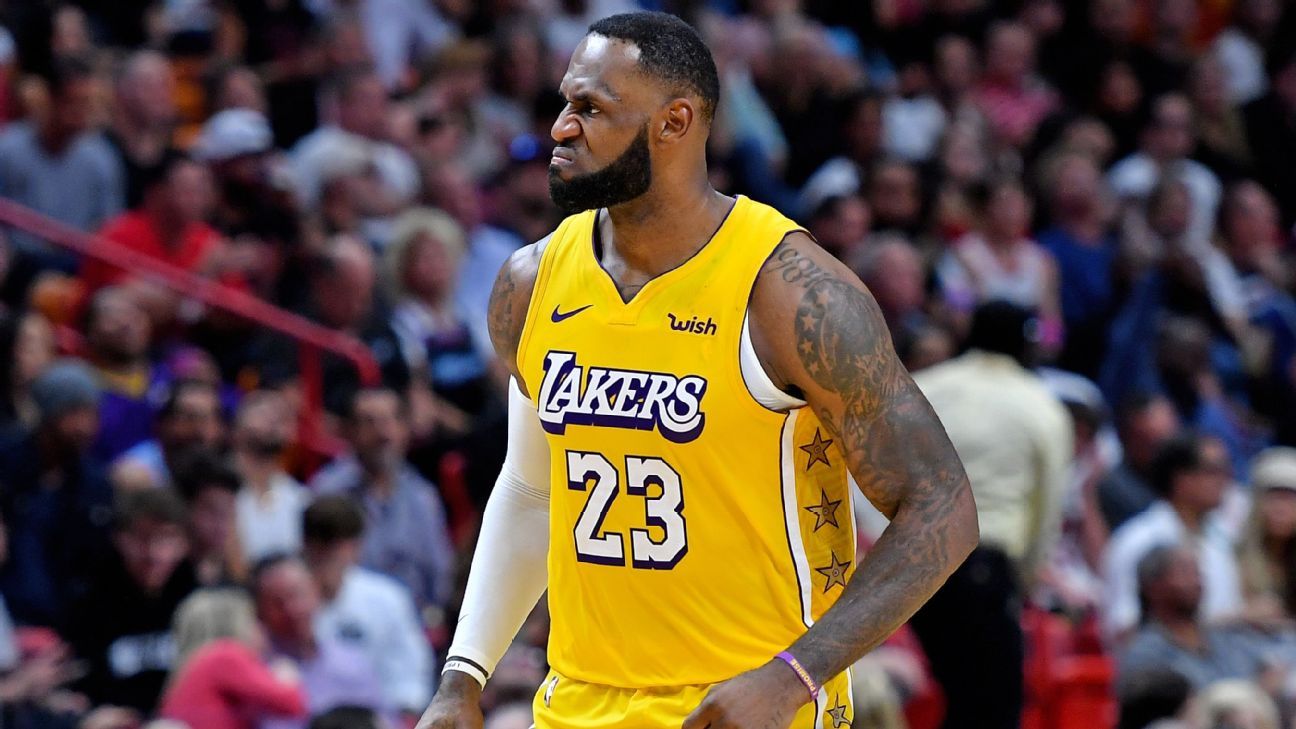 MIAMI — Facing a Miami Heat team with an unblemished record at home, the Los Angeles Lakers‘ road winning streak looked to be in jeopardy because of a disastrous first half from LeBron James.

“Well, we were down today because of me,” James said, referring to a Miami lead that swelled as big as 14 as James turned it over seven times and missed seven of his 11 shots in the first half. “I was reckless.”

The Lakers were a different team and James was a different player after the break. L.A. was able to rally to win 113-110 to become the first visiting team to leave the AmericanAirlines Arena with a victory, extending its road win streak to 13, largely because of James who pumped in 17 of his 28 points and dished out nine of his 12 assists in the second half.

And James was able to rally personally thanks to a little help from his friends, namely Laker big men Anthony Davis and DeMarcus Cousins.

“My teammates got on my ass,” James to ESPN’s Israel Gutierrez during a walk-off interview on the game broadcast. “They told me you’re playing too passive, thinking about the game way too much instead of read and reacting and doing what you do. … [Davis] got on me, Boogie Cousins got on me and they told me to just be me. So I was like, ‘Thank God we have two halves in a basketball game,’ where I can flush the first one, and then come back and try to help us win.”

It didn’t start off smoothly after the pep talk. Jimmy Butler intercepted a James pass on the first possession of the second half, tossing it ahead to Kendrick Nunn to put the Heat back up double-digits.

“Jimmy was the one who got his hands on it again,” said James, whose all-time record against Butler evened up 17-17 with the Laker win. “But I knew what was happening, and I just read it wrong. And I was able to make the right reads after that.”

L.A. completely turned the tables on Miami from there, climbing out of the 10-point hole and building an 11-point led of its own.

“Second half, he definitely picked it up everybody all around,” said Danny Green. “Turn the ball over less and got some good shots got it going, got our rhythm going.”

It’s a rhythm that the Lakers have mostly kept intact since an opening night loss to the L.A. Clippers, now owning a 23-3 record, tied with the Milwaukee Bucks for the best in the league.

In a testament to their team makeup, it was Cousins in street clothes and Davis, eight years James’ junior, holding the Lakers’ star accountable.

And after he, along with Davis’ night of 33 points, 10 rebounds and three blocks, was so instrumental in the Lakers’ second-half comeback, it was James distributing the credit all throughout the roster.

“In the second half I got back to myself. Playing my game and we all fed off of JaVale [McGee]. Especially in that third quarter, he was blocking everything at the rim,” James said. “AD got it going. Danny [Green] got it going, [Kentavious Caldwell-Pope, too], and I wanted to fill in and just try to help us close that gap and we did that.”

And afterward there was appreciation shared for James’ open ears as much as there was for his close-out play.

“We all have respect for each other and have the confidence to go up to whoever and try to get them going,” Davis said. “The fact that he listens and everybody on the team accepts constructive criticism from our guys is what makes us so good.”

Pels’ Favors returns after grieving mother’s death
Kawhi, George both go off for 40 in ‘special’ night